The swine creation transformed and evolved significantly in the last few decades. The productive system passed of a extensive system for intensive, being seen as a industrialized process, with increase in scale, appearing the confined creation, that generates great amounts of residues, causing great ambient problems. This system previously requires a handling differentiated to the one of the lagoon was, used, where if it followed one high ambient impact. Inside of this context, a new disposal for the produced residues becomes necessary (biomass) and its reuse. Following appropriate techniques, they appear as option the digesters, where the treatment and the final disposal of the residues of the swine generate electric energy through biogas e, still, make possible the residual effluent job of as the fertilizing one of ground. With the objective to study this productive system and to demonstrate the gotten ambient benefits in the implantation of the same, a case study was become fullfilled, in the Marmentini Farm, where if it evidenced the existence of great resultant ambient liabilities of the incorrect destination of the residue, considering the construction of a digesters and carrying through an evaluation of its performance and viability. One arose that the property generates 2,499, 60 kg of dejections, that result 749,70 m3 of gas, resulting in 324,62 m3 of methane. How much to the fertilizer, it was esteem that the farm generates 10,707 liters of dejections per day, that result in 321 m3 of dejections for month. When analyzing the amount of nutrients, contained in these dejections, verified that 674.1 kg was nitrogen, 513,6 kg match and 513,6 kg potassium. With this volume of gas methane, from gas, and of nutrient for the fertilizer, the property can have a new income, being of R$ 25,64 for ton with the sales of carbon credits, for the burning of the methane, and of R$ 2,219, 75/ month, with the sales of the fertilizer. This results in an annual income of R$ 28.793, 83, as the cost of the equipment was of R$ 64.999,61 to a value of 4% maintenance a.a., got a profit in the third year of R$ 13.581, 92, proving that the enterprise is viable economically, beyond presents great ambient profits, since it passes of ambient liabilities for a new source of income. 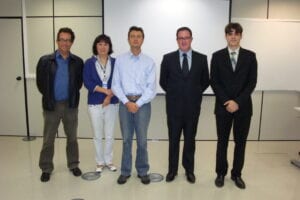